The USGBC is a nonprofit that was founded in 1994 with the goal of improving the sustainability of building design, construction and operation.

“We want to do more good rather than less bad with buildings,” explained Sarah Boren, Director of USGBC of Florida. Buildings have a huge environmental impact, she said, using 71% of all electricity, causing 40% of all emissions, consuming 60% of all energy and using 14% of potable water. USGBC sees green building as the solution to that problem.

LEED is a holistic green building rating system that’s now being used in 162 countries. “It’s basically raising the bar on where we spend 90% of our time: indoors,” Boren said.

Now USGBC is trying to take that same concept and scale it up with LEED for Cities and Communities. The new rating system is the 4.1 beta program, which started a little over a year ago with grant money from the Bank of America Charitable Foundation.

Six cities signed on initially, then others expressed interest. USGBC ended up getting a second Bank of America grant, allowing 14 more cities to join the pilot program, including Orlando and Miami. There are four certification levels, which are determined by total score: Certified (40-49), Silver (50-59), Gold (60-79) and Platinum (80-100). Atlantic Beach is not yet certified but is sitting at 58 points. Boren expects the city’s certification process to be finished by mid-May.

“You can’t really make informed decisions without good data,” Boren said. “So we’re super excited that we’re going to get really good data. Cities are going to have clear priorities of where they want and they can communicate this to the public in a really easy dynamic format.”

Data collected during the certification process will also allow cities to compare themselves to other communities.

“It basically says that we care about the environment,” Shane Corbin, Director of Planning and Community Development for Atlantic Beach, said of the city’s potential LEED certification. “But the whole purpose of it is to track all these metrics, and try to do better. And now that we have all the data in the system, and we can look at that, we can then have strategies to say where are we lacking? Where can we get our score higher? And what sort of policies and procedures and things can we do to become a greener city?”

“You could sort of think of it like going to the doctor, to give you an analogy, where you look at your blood pressure, you look at your cholesterol, any other health indicators, and you realize, ‘Well, my cholesterol is too high. I need to get that down because I want to be healthier,’” he said. “It’s the same sort of concept where you’re looking at where you can do better and be healthier. In this case, it’s how can we be greener, be healthier for the planet.”

Corbin said climate change, sea level rise and adaptation are priorities for Atlantic Beach’s leaders, but the city is still in the early stages of figuring out how best to address those issues.

“We don’t have enough information yet to begin forming policies on what to do to adapt to sea level rise,” he said. “We just don’t have it yet. But we’re going to have it soon.”

USGBC will be hosting an event on Thursday, April 25, where residents can learn more about LEED for Cities and Communities through a case study of Atlantic Beach. Speakers will include Mayor Glasser and Corbin, as well as Vatsal Bhatt, USGBC’s Director of LEED for Cities and Communities, and Sean Lahav, a Graduate Teaching and Research Assistant at the University of North Florida who designed a how-to manual to help other cities seek LEED certification. 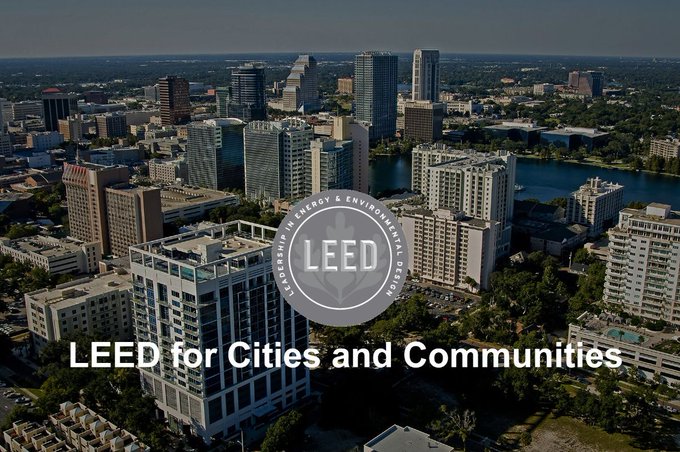 The event is scheduled to run from 4 to 6 p.m. and is being held at the Jessie Ball duPont Center in the 2nd floor lecture hall. Tickets can be purchased here.

Corbin said he hopes Atlantic Beach’s participation will inspire other communities to seek certification. “Especially now that the state really has put a lot of focus on sea level rise and climate change and adaptation to rising sea levels,” he said. “I think that’s going to raise the awareness throughout the state of Florida that not only do we need to prepare for sea level rise, but also we need to start doing things more holistically, and not just per household but as a city to be greener and reduce our impact on the environment.”

“As part of our focus on environmental leadership we are poised to be the first city in Florida that’ll be a certified city under LEED for cities,” said Atlantic Beach Mayor Ellen Glasser. “I’m really pleased that Atlantic Beach is taking a leadership role, no pun intended, towards this effort.”

Brendan Rivers can be reached at brivers@wjct.org, 904-358-6396 or on Twitter at@BrendanRivers.